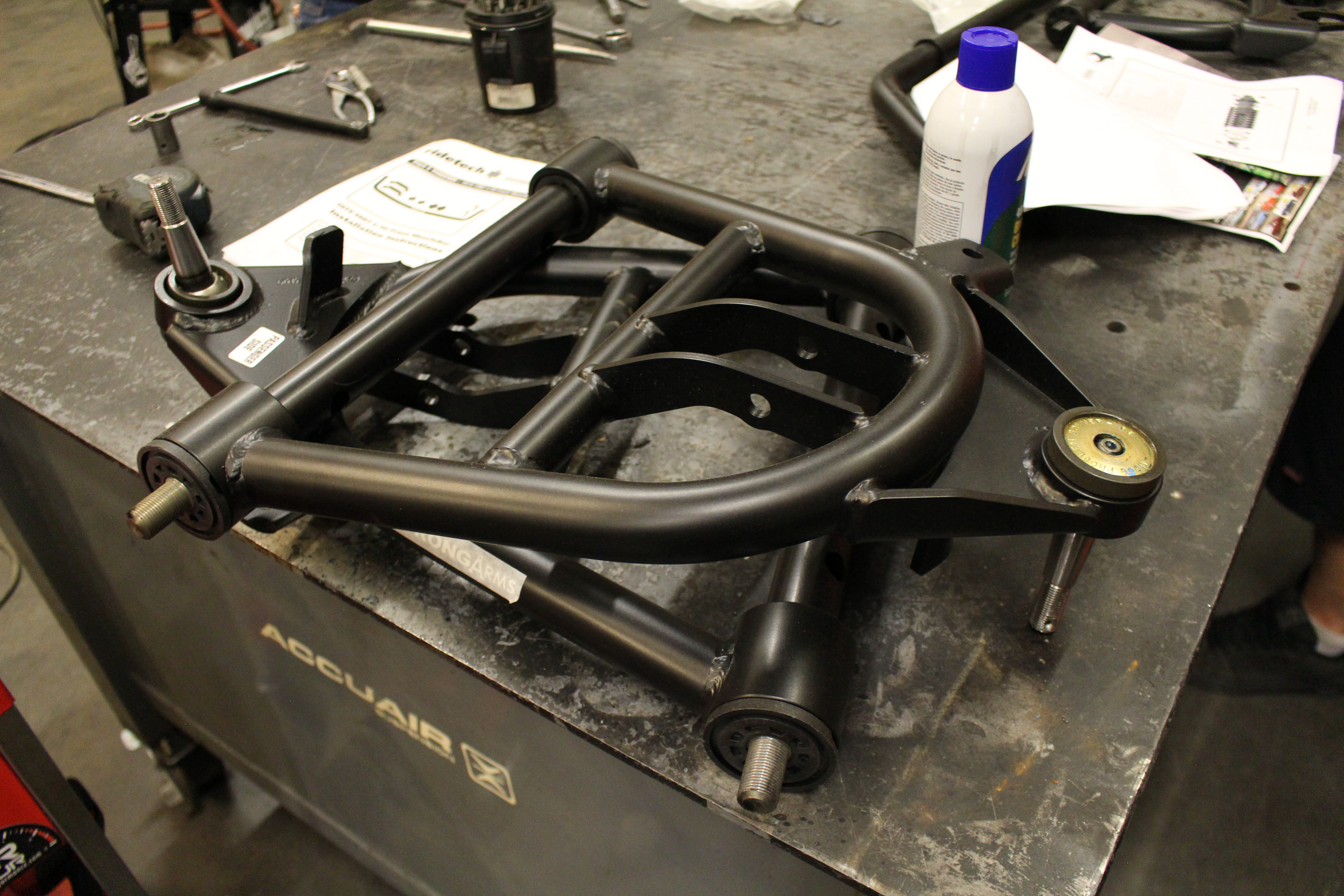 How does your front suspension work? What are the front suspension components and how do they fit together? What the heck is a ball joint, anyway? Well those are all good questions, and frankly, they’re ones that we’re going to address in this article. Because sometimes you just have to start with the basics.

But before we do, let’s add a disclaimer. This is not an exhaustive list of front suspension components, as there are millions of cars out there on the road, all of them with different stuff. But we are going to hit on the major ones, and that should help out a ton.

A control arm (in some cases called an a-arm because of their shape) connects two things: The frame of your car or truck and the spindle or steering knuckle. It’s hinged on one end, usually with a bushing, and then connects to the spindle or knuckle with a ball joint.

So what’s the point of these things? Well basically, they guide the front suspension up and down while limiting lateral movement forward and aft in the vehicle. Take your average fullsize Chevy truck, for example. It has two a-shaped control arms top and bottom, and they hold a spindle in earlier models, and a steering knuckle in more recent years. All they do is move the knuckle up and down.

But if you have a 88-95 Toyota pickup, you’ve also got control arms but they’re not triangulated on the bottom arms. Instead, they have a stabilizer rod that does the triangulation called a strut rod. This type of scenario isn’t super common, but it does exist, so it’s a good thing to know about.

At the ends of the control arms are ball joints, and they’re pretty easy to picture. Just think about where your leg connects to your hips. At the end of your femur is a ball-shaped end called the Femoral head. It pops into a matching socket on your pelvis named the Acetabulum (Google is your friend).

Well a ball joint works kind of the same way. Part of the ball joint is the socket, and then the ball is, instead of a bone, a tapered, threaded rod. This rod goes into the steering knuckle or spindle, and allows it to not only turn left to right, but also travel up and down with the control arms. They’re usually secured in place with a castle nut and a cotter pin.

OK, finally we get to the spindles and steering knuckles, which, depending on who you talk to, are the same thing.

In our world, a spindle is usually found on a Chevy truck (although they’re all over the place) and their goal is to control the steering of the truck, as well as hold the wheel bearings, rotors and brakes. It’s called this because there’s a tapered rod right in the middle, and it’s what holds on all those bearings.

So your suspension travels up and down with control arms and steering knuckles, but what actually holds up the vehicle? Those are springs, which come in a few different forms. The first is the most obvious, which is a metal coil made of spring steel (naturally) that sits in a pocket between the chassis and the control arm. It’s designed to carry the weight of the vehicle itself, as well as provide movement when you hit a bump — uncontrolled movement, but it does take the brunt of the load, and then rebound it out.

While springs do the heavy lifting, shocks are what actually provide the smooth ride you sometimes want, or stiffen it up when you need it. Shock absorbers do pretty much what the name says, and absorb shocks. But they’re not carrying the load, they’re dampening it.

Struts are similar to shocks, but they’re part of an assembly that has a shock absorber and a spring. This way you can pull out the spring and shock as one unit, and work on them on a bench. They used to be mostly a car thing, but now you can find them in some trucks, too.

Point is, the tie rods can cycle up and down with the suspension, as well as pull in and out on the spindle. That’s thanks to those ball joints, which do a lot of the work.

It all works together.

There’s a lot of stuff involved to make your car or truck ride smoothly down the road, but when it’s done right, it’s almost magic. And now that you know how all the front suspension components work, you can be better informed. That’s not a bad place to be.