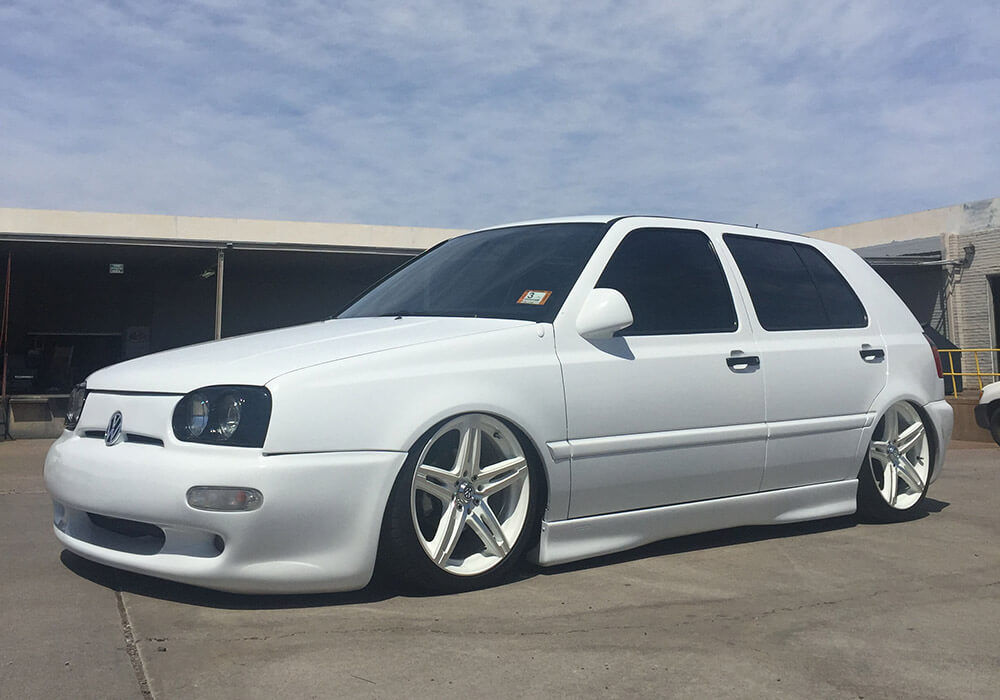 When you’ve been lowering cars and trucks as long as we have, it’s easy to get lost in the weeds a little bit. You just assume that everyone knows how we do what we do, and therefore understands what we mean when we say something like, “Well you’ll need new lower control arms, springs and shocks to get it dropped … “ Thing is, if everyone knew how to lower your car suspension, then they wouldn’t come to us, right?

Right. So let’s break it down a little bit and talk it through. Because on the surface, it’s a simple question. But dig a little deeper, and you’ve got some stuff to figure out.

Start with the car.

If you want to lower your car, you need to begin with a solid idea of what kind of suspension your car has. And there are tons of different variations out there between makes, models and years, and so having all those specifics in hand will help you out a ton.

Let’s take the Honda Civic, for example. Honda has traditionally run a strut-based suspension, which means that the spring and coil come in one package. But the types of struts and springs that you can get vary wildly. If you have a 1989 Civic Si, then you’ll need different springs than someone with a 1999 Civic Si, and different still for a 2019 Civic Si. In fact, you might also need different struts for those cars, depending on what you want to do.

Then there are cars without struts at all. Older cars, like 1960s GM models, often have the same type of suspension as a pickup of the same era. That means they don’t have struts at all, but separate coils and shock absorbers. To lower your car suspension on one of those may require springs, but you could also do dropped spindles. There’s a lot of options.

So start there. Learn what kind of suspension your car has underneath it first by doing some light googling, that way you’re educated.

Move on to the parts.

Now you need to start making some purchases. Again, what you buy will depend on what kind of car you want to lower, but here are a few options:

This is by no means an exhaustive list, and again, it depends on your car. But this’ll give you a good starting point.

As a general rule, springs are the cheapest and easiest way to go. If your car has coil springs on all four corners, you can pick up a set fairly affordably, then install them and be good to go. If you want to drop the car lower, you’ll want to consider shocks and/or struts. If you lower your car suspension too far, the stock shocks won’t be able to do their job properly. They could bottom out faster, giving you a horrible ride. So start with springs or coils, then consider your options for dampening your ride.

Then there’s the coilover conundrum.

Coilovers are super popular nowadays, on cars, trucks, buses, dump trucks — people like them is the point, and there are a ton of reasons why.

First, let’s talk about what a coilover is. The idea here is that, like a traditional strut assembly, you have a coil and a shock absorber combined. But with a coilover, you’ve got more adjustability. The bottom of the assembly is threaded, and the bottom of the coil sits on a mount that can be adjusted up or down. That means that if you want to lower your car to the ground at a show, you just have to jack up each corner and adjust down the coils. Or if you want to tune the suspension for a track, you can do that, too. You’ve got a lot of options.

There are two hangups, however. First, coilovers aren’t cheap. You are buying a shock and coil together, and depending on how much you want to spend, you could get all sorts of fancy additions like tunable dampeners and sliding camber plates. And second, it’s not always easy to install them. They might bolt right up to that ’99 Civic Si, but if you’ve got a ’62 Impala, you’ll have to do some fab work. Is it worth it? Yeah, if you want the ultimate in tunable, relatively-static suspension, then this is your best choice.

You’ve got a lot of options

There are many choices that come up when you make the decision to lower your car, and once you get educated about them, you can move forward. It’s not always an easy decision, but there is a way to whittle it down.

When you’re asking how to lower your car’s suspension, think about the “how” the most. Do you want a simple static drop, or are coilovers more your speed? Then make your decision from there.